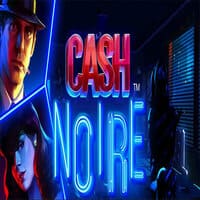 It’s been years since NetEnt premiered the incredible Avalanche mechanic, and now, it has released a new slot to feature it, called Cash Noire slot.

As implied by its name, the slot features a mystery theme, filled with thrilling bonus features and magnificent chances to win big. Thanks to the Avalanche mechanic, it offers plenty of opportunities to land multiple wins, and thanks to the Progressive Multipliers, those wins can get up to 5,000x the stake. Solve the mystery in Cash Noire slot and grab the top prize!

NetEnt is taking you on an exciting journey to the criminal underworld, where you’ll be solving the case of the Green Ace murders. By doing that, you will be the one who will scoop the biggest rewards. The slot is set in the crime-ridden streets of San Cayetano. It offers a 96.06% RTP, up to 1,024 ways to win, 5 reels across 4 rows, and it features the well-known proprietary Avalanche mechanic which NetEnt premiered years ago with its slot Gonzo’s Quest. Gonzo’s Quest is a known player-favourite slot, therefore, you should expect Cash Noire to become an instant hit, too, considering it offers the same mechanic with a new, engaging twist.

If you’ve played Gonzo’s Quest, you know that the Avalanche mechanic offers fresh new chances to grab massive wins as symbols that form winning combos disappear and leave space for new ones to fill in the gaps. The new symbols are falling from above, but this time, in Cash Noire, you will see Mystery Symbols falling down as well, which will transform random symbols into better-paying ones. If the Mystery Symbols land in the Crime Zone, though, they will clone themselves onto all the positions, and all of them will transform.

NetEnt’s Chief Commercial Officer Andy Whitworth said that Cash Noire was a mechanically thrilling slot set against the backdrop of a murder mystery which would leave you on the edge of your seat.

Whitworth said that with the return of the amazing Avalanche mechanic and a strong feature set which would help you solve the crime, the Cash Noire’s gameplay had a huge engagement and exciting potential, so everyone at NetEnt was looking forward to it being enjoyed by a wide variety of slots players and fans.