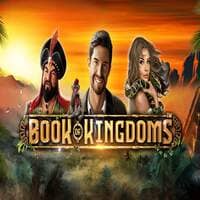 Brace yourselves because another adventure slot arrives by Pragmatic Play, Book of Kingdoms slot. This new slot has been developed in collaboration with the developer’s partner studio Reel Kingdom and one of the biggest casino news this year!

As announced on the 16th of November by the developer, the slot is now live with all of its operator partners. It is one of many products to arrive from the amazing collaboration with Reel Kingdom, and it is part of Pragmatic Play’s growing slots portfolio.

Book of Kingdoms Slot Is Live across Pragmatic Play-Powered Casinos

Pragmatic Play has launched a brand new game on the 16th of November, called Book of Kingdoms. The slot represents one of many products to be released in collaboration with Reel Kingdom. It has been added to Pragmatic Play’s series of adventure slots and will take players on a search for the famous Book of Kingdoms, lost somewhere in the mysterious desert city.

When you land five or more Coin symbols on the reels, you will notice the Coin Bonus activate. This is a Hold and Win type of bonus round, which gives you three extra Spins allowing you to find more Coins. Should you land more coins, you retrigger it and the count resets.

But to add to the excitement, Book of Kingdoms arrives with three jackpot prizes, too, which can be triggered on any spin during the bonus round. While the Minor and Major are awesome, the one that would deliver the biggest single prize is the Mega Jackpot. This jackpot can deliver a 1,000x the stake prize, making the overall max payout of the game up to 20,000x the stake! Now, that would be a life-changing sum to win!

In an exciting statement, Pragmatic Play’s Vice President Lena Yasir said that the new slot was another yet action-packed, thrilling and high-energy slot added to the developer’s portfolio. She said that it was part of the partnership deal with the Reel Kingdom, a deal which continued delivering thrilling games for players with all kinds of different tastes.

The Vice President continued explaining creating content was a top priority at Pragmatic Play at the moment, so it was more than great seeing their multi-product approach gain recognition and fans all over the world. She finished her statement saying that they were all looking forward to seeing Book of Kingdoms become another hit addition to their varied offering of slots, bingo and Live Dealer games.