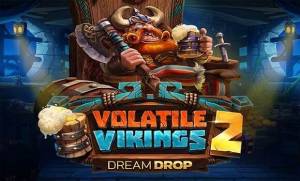 We can’t say that online slot fans don’t have enough content to explore. We’re lucky enough to have received an onslaught of fun new games in the past year, with new titles dropping nearly every day! As you can probably guess, variety is a given here. Developers keep experimenting with new ideas, hoping to bring something fresh to the table that garners success. Of course, some have already reached it! Expanding on the popularity of its beloved predecessor, Relax Gaming has released an exciting sequel to Volatile Vikings, Volatile Vikings 2 Dream Drop.

One of the best things about the first Volatile Vikings games is its premise. The title follows a group of rowdy seafaring Viking adventurers on a trip through the roaring seas. Naturally, they run into tons of adventure along the way, finding hidden treasures and looting enemy vessels. Not much has changed in Volatile Vikings 2 Dream Drop, and that’s a good thing! The new addition to the series is a continuation of this fun adventure, adding updated audio-visuals and refreshing the gameplay.

The game’s design goes through a few changes, but they’re not as drastic as some might think. Instead of featuring the ship’s hilt, the backdrop is now below deck! Players can enjoy the beautifully decorated ship as they spin the reels towards victory. The symbols on the reels themselves are similar to those of its predecessor. They feature various runic gems alongside Viking heads made of the same glistening material.

If you’re hooked on the first game, you’ll be happy to learn that the gameplay’s gotten an upgrade in this sequel! The six-reel scatter pays slot now includes many new features that can lead to hefty jackpots. One of these features is the Multiplier Reveal Mechanic. Every spin starts with two Multiplier Reveal symbols on two of the reels, each boasting a counter and Multiplier. For every winning cascade during base gameplay, the counter goes down by one. When it reaches zero, the Multiplier activates! This destroys all adjacent symbols, making space for new ones.

The game also has a Free Spins Feature. To trigger it, players need to land at least three bonus symbols, with every symbol exceeding this number adding an extra Free Spin. The best thing about the Free Spins round is that it works together with the Multiplier Reveal mechanic, leading to a persistent Multiplier and bigger wins altogether.

As you might have guessed by the name, the main attraction in this slot is Relax Gaming’s exciting new feature – the Dream Drop Jackpot. This addition has been one of the biggest highlights of the year for the brand. It gives users the chance to snag one of five progressive Jackpots, including a Rapid, Midi, Maxi, Major, and Mega Jackpot, after randomly activating the Dream Drop Jackpot bonus game.