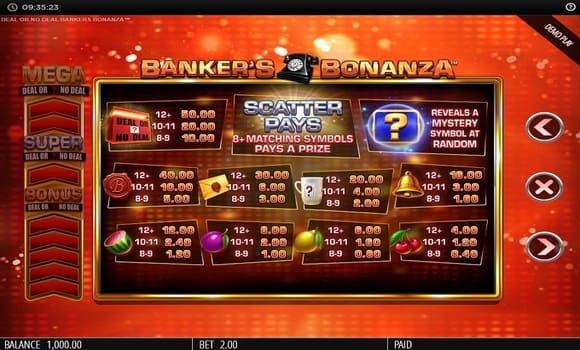 As one of the leading iGaming developers in the online casino space, Blueprint constantly works on improving its product offer. Its focus often shifts between the various casino software it provides, but this time, the standout game in question is one many fans are already familiar with! Read more about Banker’s Bonanza Slot below.

One of Blueprint’s newest ventures is the release of the branded Banker’s Bonanza Slot, which is another excellent addition to the studio’s ever-growing Deal or No Deal collection of titles! If you’re interested in giving this instant classic a shot, here’s what you can expect from it and don’t miss the more news from Blueprint here!

The Banker’s Bonanza slot doesn’t deviate from the classic design the games in the Deal or No Deal collection boast. It features a 6-reel, 5-row grid in dark red, matched with a background in the same colour, only in a lighter shade. Players shouldn’t expect many creative liberties with the game’s design, as it tries to stay true to the Deal or No Deal concept.

Naturally, this sentiment is echoed in the game’s symbols. They feature red boxes, question marks, wax seals, and classic fruits. Of course, the iconic old-school landline also appears in the game’s logo.

While its visuals aren’t too unique, what sets Banker’s Bonanza apart from some of the other games in the collection is its audio! The game includes commentary from the legendary Deal or No Deal presenter Noel Edmonds, activated when the game’s bonus features are triggered.

Banker’s Bonanza takes what players love about the other Deal or No Deal games and gives it a bit of a creative twist. As you can imagine, the Deal or No Deal is one of the most coveted features during gameplay. To trigger it, you’ll need six or more winning cascades during a spin! Additionally, if you happen to trigger the MEGA version at the top of the Banker’s Trail, you’ll receive extra spins without question!

The Extra Spin Multiplier requires a few specific conditions. If cascade multipliers land on the screen during a win, it will be multiplied from all the cascades that occur! As you can imagine, this can lead to some huge prizes!

Banker’s Bonanza is undoubtedly a unique addition to Blueprint’s growing Deal or No Deal game collection. The slot has enough fresh takes to add novelty into the mix while sticking to the features that make it distinctly a part of the Deal or No Deal family.

We don’t doubt players will have an incredible experience with this game while awaiting the next release in this beloved series. Of course, with these slots gaining more than enough traction with each new release, we believe a new title in the series will grace online casinos in the future.