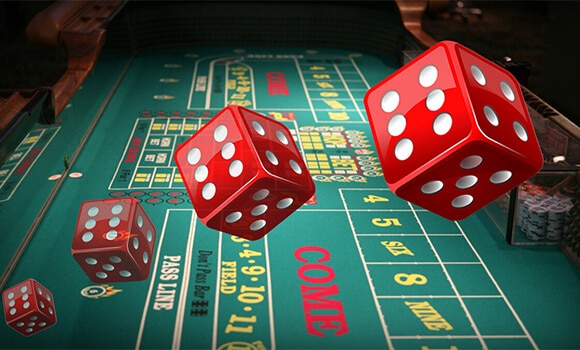 A Brief Introduction to Craps

Craps is a very popular table game that involves players trying to predict the numbers that appear on a pair of rolled dice. When it comes to games of chance, craps is easily one of the most loved as it is played by hundreds of thousands of people all around the world in both land-based and online casinos. So, why has this game become so popular? Well, the answer to this question lies in the fact that there is a huge number of different betting options that a player can place their hard-earned money on. Furthermore, as it is a game that is played at a fast pace with money changing hands rapidly, craps tables usually attract those casino goers who are after an adrenaline rush. But how did this game come into being and what types of bets and strategies are there? Find out below!

The History of Craps

Many people believe that craps evolved from an English medieval game known as Hazard, while others are convinced that it originated from the Arabic game Azzahr, which when translated into English roughly means “the dice.” However, there is also some proof that suggests that a game similar to craps was played by the Ancient Romans. Obviously, dices, as we know them nowadays, didn’t exist back then, so Roman soldiers would reportedly collect sheep, goat, and pig knuckles, carve them into cubes, and toss them on their shields. This is where the term “rolling the bones,” which is one that is used at contemporary craps tables, comes from. Furthermore, there is more historical evidence that suggests that Roman slaves played the same game, using clay, animal teeth, or nutshells to make their dice.

The origin of this popular table game is something that historians will continue to debate, but something that they can all agree on is that it was John H. Winn, an American dice maker, who created the modern rules of craps in 1907. It was Winn who came up with the idea that players should be able to bet for or against the person who is rolling the dice (the shooter). By coming up with this idea, he decreased the amount of cheating that had crept into the game. Before, players would cheat by using loaded dice that would always show specific numbers, ensuring that they never lost their tosses. With the introduction of betting for or against the shooter, the use of loaded dice became obsolete. Now we know some of the history of craps, let’s take a look at how it is played.

How Craps is Played

When you first experience a craps table, all those different boxes and numbers might make your heart skip a beat. But in truth, craps is a relatively simple game that can be quickly learnt by anyone if they make the effort. There are over 30 outcomes you can bet on. But you need to only know a few in order to play like a professional. When you start a game of craps, there are two options available to you – place your money on the Pass line or in the Don’t Pass rectangular box. If you put your bet on the Pass line, you need the shooter to win, whereas if you place it in the Don’t Pass rectangle, you need the shooter to lose. The shooter will win if they land a 7 or 11 and will lose if a 2, 3 or 12 is rolled.

So what happens if a number appears that isn’t mentioned above? Well, in that case, nobody loses and that number becomes known as the point number. Once a point number has been assigned, the shooter has to try to roll that number again before a 7 is rolled. If they manage to do that, then everyone who placed their bet on the Pass line will win. However, if they role a seven before they roll the point number, those who put their money in the Don’t Pass rectangle will win. Once one of the numbers has been rolled, the round is finished and another person takes their turn to be the shooter. Most betting occurs at this point as players can choose to multiply their original bets or bet on another number to increase their odds of winning.

will be moved to a box, which corresponds to the rolled number. You will then win if the point number is rolled before a 7 appears.

If there is a point, you have the option of doubling your pass line bet if you believe that this particular point number will be rolled before another 7 pops up. This has a house edge of 0% and increases your winnings from your original bet, making it one of the most popular bets for craps players to make. You’ll be glad to hear that odds can be taken on a Pass line wager at any point in the game.

With this particular bet, you wager that a 7 will be rolled before the point. As you can see, it’s the opposite of Taking the Odds. The odds here are not as favourable as those for Taking the Odds. And you will win fewer chips than what you originally bet.

This is a one-roll bet where you are wagering that 6 or 8 will be rolled before 7. These bets pay out even money, but due to their high house edge, players are often told to avoid them.

Casinos manage to make a big profit not because their staff are lucky and outplay customers. But because they have a built-in advantage that is known as the “house edge”. Those who are new to casino games such as craps need to understand this before joining in the fun. This house edge is profit that the casino picks up from every wager that is made. That’s right, the casino makes money on every wager, regardless of whether it wins or loses. As you have seen above, there are many different bets you can make and the house edge is different with each one. For example, some craps bets have a house edge of zero and others have a house edge of two digits. It’s important to have some understanding of which is which, so take the time to do some extensive research.

Let’s give an example of how it works. Bets that are placed on the Pass line have an edge of just 1.41%. Therefore, for every $100 that is placed on the Pass line. The casino will pick up $1.41, regardless of whether the player wins or loses. Some players like to take a risk and place a proposition bet because they reward big pay outs. However, if you’re a beginner you should avoid these bets as the house edge can range from 5.56% to 16.67%. Winning bets can also have an influence on the house edge. For example, when a casino has to pay out for a winning multiple-roll bet, they normally round down the amount. In other words, if a player is meant to win $37.37, the house will round it down to $37.00, boosting their own profits.

We will now outline a number of strategies that will surely help you have success at a craps table.

Many players sit down at a craps table before they have learned the rules and the different betting options. To do this is foolish and you’ll probably end up walking away with much lighter pockets. It is imperative that you come to terms with all the different betting options, payouts, and house edges. All this information can easily be found online.

A smart craps player will combine two bets that have a low house edge to increase their chances of winning. For example, they might combine a Come bet with a Pass Line bet. This means that if a 7 or 11 is landed during the come-out roll, both bets will be won.

This is the superstitious (and often costly) belief that a dice roll has an influence on the dice rolls to follow. For example, if a 5 is followed by an 8, the next time a 5 lands, the player will place a bet on the next roll being an 8. Each roll is independent of the past and every smart craps player knows this.

Use the floor and ceiling strategy

This is all about knowing when to quit. Smart players will adopt this approach by giving themselves a winning goal and a loss limit. It’s often recommended that your win goal should be around 30% of your starting bankroll. Therefore, if you start with $200, you should stop when you have a profit of $60. Regarding losses, quit after you have lost 30% of your original bankroll.

If you are playing craps at a table in a casino then there is table etiquette that you need to abide by. We are going to mention some of the most important ones below.

* When it is your time to roll the dice. Don’t blow on them or polish them – shake in one hand and then gently roll them down the table.

* Never reach across and touch the dealer.

* When telling the dealer what bet you want to make and how much you want to place be sure to speak clearly.

* If you have won, don’t pester the dealer for your winnings as he will pay you in due course.

* Don’t touch your chips when you are waiting for your winnings.

* Don’t be rude to fellow players.

Casino goers who are looking for an entertaining fast-paced and highly social game. Should definitely try their hand at a craps table. However, before doing so, it is highly recommended to take some time to learn all about the different betting options and house edges as failure to do so could lead to you walking away from the table with considerably lighter pockets then when you arrived. Learning a few popular craps strategies will also improve your chances of having an enjoyable time while at the table. Since this is a game that is all about luck (something you cannot influence), having a fun time while playing should be your main aim, be it at home online or in an actual casino. Once you find that you’re no longer having fun, it’s best if you step away from the table.