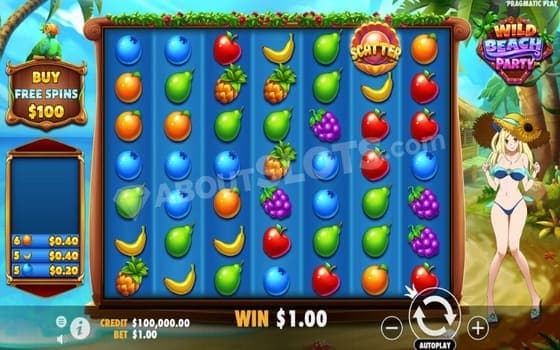 We’ve been treated to quite a few new slot releases lately. Of course, we’re not complaining about this in the slightest. iGaming publishers seem to be stepping up their game by experimenting with unique gameplay elements, fun themes, and even out-of-the-box art styles that give these new titles a much-needed needed refresher! Here is Wild Beach Party Slot!

While we’ve noticed this trend with plenty of developers, none does it better than Pragmatic Play. The publisher isn’t holding back with the new content it’s dishing out, and its latest addition to its slot line, Wild Beach Party Slot, is no exception.

As you can probably guess, the inspiration behind the game’s design is those unforgettable days and nights we rarely get to spend when on exotic vacations. In hindsight, there’s nothing too wild about this theme. It’s been done before multiple times, and pretty well at that too! Of course, Pragmatic Play puts a unique spin on the theme by giving it a light-hearted vibe that players can’t help but love.

To start, the game’s backgrounds include beautifully illustrated beach scenes in the day and night-time. These are followed by various fruit symbols, shells, and even a shining pearl or two! The standout of the game is the mascot.

Instead of going for the traditional animal mascots most slots tend to use, Wild Beach Party slot features a peppy animated young woman that dances along to the rhythm! Naturally, the music is an excellent overall fit for the theme as well, featuring fun tunes inspired by Latin music.

Wild Beach Party features a 7×7 grid that requires at least five matching symbols for a successful spin to trigger. Its gameplay is pretty standard, but it does include a few interesting additions that make it more exciting than your traditional slot. If you happen to have empty tumble positions, Wild Symbols are likely to make an appearance. They carry multipliers of 2x that can be further doubled if they reappear in a tumble sequence again after a win. These can grow up to 256x your initial bet!

Another interesting feature the slot boasts is the Bound Round. To trigger it, players need to land at least three Scatters. Their position on the reels doesn’t matter, as they’ll reward players a minimum amount of 10 Free Spins. Depending on how much you win that round, you’ll also receive additional Free Spins!

Pragmatic Play’s Wild Beach Party slot is undoubtedly a great new release. It doesn’t take itself too seriously, instead, it focuses on providing a good time through a laidback atmosphere. The game might be a great addition to what the developer has to offer, but it’s not even close to being the end of the line for the company.

The developer has been releasing at least one game per month since the year began. We’ve already been blessed with top-tier releases like Queenie and Extra Juicy Megaways, but we don’t doubt there’s much more to come from Pragmatic Play down the line!