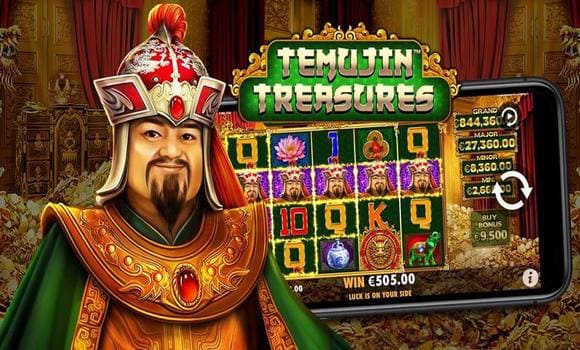 Welcome to Spinsify’s news and Pragmatic Play has launched its latest game, Temujin Treasures slot. The slot takes you on a conquest alongside the world’s most successful leader, Genghis Khan. If you know anything about the Mongol Empire’s leader, you know he was ruthless. But don’t worry, as Pragmatic Play has twisted the plot a bit and gave it a jolly take!

Temujin Treasures is a 4×5 slot, which offers 1,024 ways to win and high volatility. It is the latest slot added to Pragmatic Play’s ever-increasing portfolio, following titles like Fishin’ Reels, Joker King and Eye of the Storm.

The Temujin Treasures Slot Await! Prepare for a Conquest!

The game provider Pragmatic Play regularly surprises its fans with brand new slot releases. The latest addition to its growing portfolio is Temujin Treasures slot, a slot inspired by the Mongol Empire and the world’s most successful and ruthless conqueror of all times, Genghis Khan. In fact, Genghis’ original name was Temujin, therefore, the developer made a really great effort to fit every piece of the puzzle together.

The Eastern-inspired soundtrack, the vivid colours and the little fortune cookie inspiring messages appearing after a win depict the theme perfectly. Even though Khan is a known ruthless conqueror, though, Pragmatic Play has made sure to depict it in a light, jolly manner, so you can rest assured that you’ll have plenty of fun playing the slot.

The slot arrives with 1,024 ways to win and is loaded with exciting features and payout potential of up to 9,000x the stake. Wild Switch is one of them. This is a modifier that is activated whenever you land 6 or more matching symbols on the three middle reels. When that happens, the modifier turns all of those symbols into Wilds.

Whenever you land three Scatters on the middle reels, the bonus game is triggered. The setting changes and the Wheel of Fortune appear on the screen. When it spins, it can deliver cool prizes, such as Multipliers, Free Spins and even one of the four Jackpots! Yes, Temujin Treasures arrives with four jackpot prizes!

If you see the Wheel land on a Multiplier or a Jackpot segment, after awarding your prize, it will spin again to give you another shot at great prizes. 6 to 50 Free Spins can be won, should it land on one of the Free Spins segments.

When the Free Spins are triggered, a Firecracker may appear on any spin, delivering a small bonus such as Wild Multipliers, Money Values, more Free Spins or one of the Jackpots.

Pragmatic Play Shares Its Statement on the Release

The Chief Business Development Officer at Pragmatic Play, Yossi Barzely, said that the inspiration for Temujin Treasures was the Mongol Empire, more precisely its leader Genghis Khan, but with a twist on the ruthless chapter of the world’s history.

He said that the title included a lot of exciting features that could take players to some huge wins, and would provide them with an experience they would never forget.