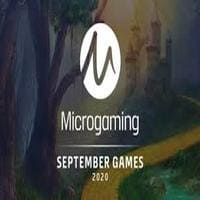 Could there ever be more exciting news than knowing that Microgaming is about to reveal brand new jackpot slot titles? We all know how rewarding its progressive jackpot network has been throughout the years, so to learn that new titles are joining it, couldn’t make us happier.

But, jackpot slots aside, you should know that the developer has prepared quite the slots lineup to be released throughout the month of September. Make sure you’re the first one to find out all about these amazing slots!

Microgaming to Add New Jackpot Slot Titles to Its Portfolio

A range of premium slots from its diverse network of independent game development studios is about to be released by Microgaming. The developer released a statement a few days ago announcing the release of several exciting titles by its independent studios, among which, we’ll see brand new jackpot titles.

As it appears, we’ll get to see new Mega Moolah AND WowPot titles arriving this September, which couldn’t be more exciting news for all of Microgaming’s progressive jackpot slots fans.

On the 1st of September, following a successful early release with Kindred Group, the developer launched Book of Atem: WowPot slot by All41 Studios network-wide, a slot that joined Wheel of Wishes as the very second slot to feature the WowPot jackpot, which starts seeding at €2 million. The additional Major jackpot in this slot starts seeding at €50,000. Anyways, the slot is a 5-reel, 10-payline highly volatile one which hosts several game features such as Free Spins and Expanding Symbols.

Believe it or not, a third WowPot title arrived, as well, Sisters of Oz: WowPot, developed by Triple Edge Studios. The game was early released with Betsson and offers 20 paylines across 5 reels. It is a fantasy-themed slot with Jumbo Block Symbols, Free Spins and a progressive jackpot Bonus Wheel, guaranteeing one of the four jackpots.

And then, you’ll see the arrival of the mega-star, the Fortunium Gold: Mega Moolah, the slot that combines Stormcraft Studios’ iconic steampunk-themed slot with the developer’s renowned Mega Moolah progressive jackpot, which continuously awards multimillion prizes to lucky players. The slot is set to launch on the 22nd of September and will feature Victoria and Maximillian making their triumphant return in the 5-reel, 40-payline slot packed with Mystery Symbols, Free Spins with Mystery Reels and Win Booster features.

On the 29th of September, developed by Neon Valley Studios, arrives Noble Sky, a 25-payline slot with a win potential of up to 5,000x the stake from the Grand jackpot, packed with Multiplier Trail and Vault Bonus features.

Other Premium Slots to be Released

On the 3rd of September, Snowborn Games’ Stellar Portals was released, as was Almighty Aztec by SpinPlay Games on the 9th. We’re expecting the arrival of Spectre Estate by JustForTheWin on the 15th, followed by the two new table games releases by Switch Studios on the 17th and 24th, the No Commission Baccarat and Sic Bo titles.

From its content partners arrive One Million Megaways BC by Iron Dog Studio, Cubes by Hacksaw Gaming, Star Clusters Megaclusters by BTG and Magic Merlin Megaways by Storm Gaming, among more than 30 other slots to be released by Microgaming’s content partners.