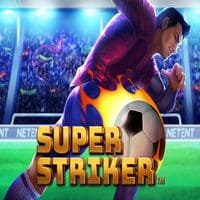 NetEnt was on fire last month! The developer has announced the arrival of another slot yet for the month of April. Just as the end of the month is coming near, NetEnt has decided to surprise its entire football fan player base with a new slot called Super Striker Slot.

The slot is set out to deliver a highly engaging experience, filled with special features, and about to provide you with some whopping prizes.

NetEnt, the award-winning developer, has decided to surprise its fans with a brand new slot inspired by football. Just as the month is coming to an end, and amidst the Covid-19 outbreak, when football fans are not able to feel the thrill of a good match, NetEnt has released a slot that would increase their level of excitement at least just a little bit.

As the developer explained it, many fans were looking forward to this summer season’s much-anticipated football matches, but sadly, due to the pandemic, they were unable to do so. Therefore, NetEnt has offered all football fans from all across the world a little bit of hope, in the form of a new football-themed slot called Super Striker slot.

Super Striker slot ™ is a 3-row, 3-reel video slot which offers a Bet Slip concept to add to the thrill, which was premiered with the slot Scudamore Super Stakes and was designed to recreate the anticipation of betting on sports live.

But, the slot also comes packed with a Golden Multiplier feature and some incredibly fun, multi-level Free Spins. Should you land a Golden Scatter during the base game, you will grab an instant win. But, should you strike a hat-trick with these symbols, you’ll trigger the five-level Free Spins which arrive with an increasing Level Multiplier to add to the fun and the payout potential.

Collect nine of these Golden Scatters and you’ll level up. Reach the Free Spins final, and you’ll grab the 10x Level Multiplier. During the main event, each Golden Scatter you collect adds to the total win and retriggers the Free Spins. Don’t forget to purchase your Bet Slip during the Free Spins, as it will track how many times a specific symbol would appear during the round, and offers side bet opportunities for you, to match the excitement of sports betting.

NetEnt’s Statement for the Slot Release

NetEnt’s Director of Games Bryan Upton, with a note of regret in his voice, said that maybe they couldn’t bring the excitement of this year’s football with this new release, but they were hoping to give football fans something to keep them excited until football returns on the TV screens and football stadiums.

Like Upton said, the unique Bet Slip feature returned in this title, with bets crafted specifically for Super Striker slot, added an extra reason to play when those bets came in.

Finally, Upton stated that Super Striker™ was a classic and a simple game that they have designed to attract any sports fan, including those players new to slots and those looking for something else to do while waiting for the football betting calendar to get filled again. He challenged players to chase the Golden Scatters and score some big wins!