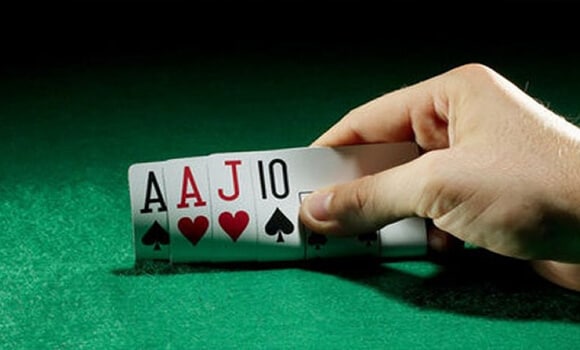 Getting to Know Omaha Poker

Omaha Poker is one of many poker variants played around the world. This is one of the more popular poker options, really only coming in second to the hugely successful Texas Hold’Em. In fact, the rules of Omaha Poker are not that dissimilar to Texas Hold’Em, which could help contribute to its popularity. We’ll cover the ins and outs of how to play the standard version of Omaha Poker later on, but it is important to point out here that this game has a range of betting options attached to it, more so than many other poker games. It actually can be played with no limit, a fixed limit, a half-pot limit, pot-limit and even more – it’s all this that makes this game so popular with a wide number of players.

With regards to all those limit options, here we will discuss only the pot limit version, which, as a newcomer, should really be the only one you play at the start. No limit Omaha Poker is not so commonly played, and if you’re not familiar with it, can decimate your bankroll. An interesting point that we should probably raise here is that one of the ways to succeed in this game is actually through the mistakes of the other players. In order to be successful, you need to minimize your own mistakes and learn how to capitalize on others’. To this end, it is very important that you know all the rules of Omaha intimately, in order to reduce the chances of getting caught out by your opponents.

A Brief History of the Game

Contrary to popular belief, Omaha Poker did not originate out in the Wild Wild West. In fact, it was more tamely created in Las Vegas. The game actually has a very short history in comparison to other poker variants. As it really only came into being in 1982. Before the game Omaha Poker as we know it today became completely official, there were a number of different variants floating around. The original game, which came from Detroit, allowed players to take five hole cards rather than the four hole cards as we know it today. Back then, the game was also known as Twice Three. As its popularity grew, each game was forced to evolve because it was played using a single deck of 52 cards with each player having five cards – limiting the player number.

As it developed into the four card game, Omaha started to spread to other states. During this time, it was known by many different names, with some people suggesting that ‘Omaha’ was finally picked simply because it was a centrally located city. Other names it was called by – and sometimes still is – were Eight or Better and High/Low Split. Once the game fully established itself, it became hugely popular and is continuing to grow to this day. Even within the game itself, there are a number of additional variants such as pot-limit Omaha. The game also features prominently in a number of major poker tournaments and provides players with the chance of showing off their skills, using a variety of different strategies to get ahead.

As we’ve mentioned, Omaha and Texas Hold’Em are very similar, so let’s quickly clear up the differences before getting into the details. Omaha has four cards given to each player whilst Texas Hold’Em only has two. In order to create a poker hand, the player has to use at least two of the cards in their hand for Omaha; whereas in Texas Hold’Em, they don’t. In the same vein as other poker games, Omaha is a community game that can have anywhere from two to ten players, all competing for the same pot. Wins can occur if all other players fold and you are the only player left, or you have the best hand in a showdown at the end of the final round.

Before any cards are dealt, the two players on the left of the dealer must place the blind. The one next to the dealer is the small blind, the second one the big blind. Once this is completed, the dealer can then deal out the cards to the players – each player being dealt a single card until all of them have four cards in their hands. None of these cards are shown to the other players. Then comes a betting round called the preflop where all players have the chance to perform an action. Players can choose to fold instantly, throwing away their cards and waiting for the next round. Alternatively, they can call a bet that must match the big blind, or they can raise, which involves a minimum bet of double the big blind.

Each player will take their turn in a clockwise fashion, having the same options as the player before. Once this round has been completed, the next round, called the flop, can commence. This is where the community cards get dealt. In this round, only three of these will be placed face up in the centre of the table so that all players can see the cards. Again, there is a round of betting with the same options as before. Once this is complete, there is another round called the Turn. Which is when a fourth card is placed face up in the community card line. Players can once again check all these cards and make choices as to how they wish to proceed. This last round then triggers the River.

The River is the fifth and final card to be added to the community cards. And marks the closing of the game. Once that card has been placed, it is time for the last round of betting to occur. When everyone is satisfied with their actions, it is time to see who is the winner. If you’re lucky, you’ll be the last player standing and will win by default. However, this doesn’t often occur and usually there are a couple of players left in the game. In this case, a showdown will occur with each player showing their hands, with the highest value hand winning. Hand combinations are the same across all poker games with a Royal Flush being the top and a single high card being the lowest.

There are a few very simple pointers you can follow in order to get ahead in the game. First up, simply play within your bankroll. Even if those big wins look great, don’t chase them because you’re only going to lose out. Omaha can swing back and forth very rapidly, so make sure you’re covered for at least a few rounds. With this in mind, you should always pick a table that suits your budget. You should also know the odds that are available. Part of what makes poker such a great game is that the odds can be beaten. If you know when to put your money into the pot and when to stay out of it. At this junction, we should point out that emotions don’t win this game – maths does.

There are also different styles of poker you can play. In Omaha, no matter whether you see professionals playing fast and loose, your best bet is to play tight. This means that you should be careful with what bets you place, calculating the outcomes carefully and not throwing out money willy nilly. It’s also important not to get attached to specific cards. Yes, we know Aces are great, but pairs hardly ever win in a showdown so if that’s all you’ve got, even though they’re high, you’d better change tack. Lastly, as we touched upon, you need to be in control of yourself at all times. You should never play when you’re sad, angry or drunk as these states can leave you unfocused and likely to make impulsive decisions.

There are a large number of online casinos that offer Omaha, though not quite as many as we would hope. Once you have found a new casino offering the game, there are a few checks you should run before signing up and beginning to play. It is important to make sure that the casino is operating fairly and is fully licensed by a governing body. This means that the casino has to follow specific regulations that will ensure your safety. Once you are certain the casino will payout any wins and not give your personal data to other companies, it’s worth your while checking out the bonus options that they have on offer. A good bonus can help you get a head start in the game, doubling your bankroll.

Omaha poker is a fast-paced game that is highly enticing to many players across the world, simply because it has so many options. Being hard to master does bring a challenge and with that there is also the lure of a decent pot. If you can remember the rules, follow our basic strategies and find a great casino that offers the game. You’re already well on your way to having some fun. Of course, we’ve only touched the surface of this games. So if you’re really interested in becoming better. You’ll need to hit up some of the more advanced strategies out there. First, though, get to grips with the basics, know them like the back of your hand, and then learn what all those poker hands are as well!