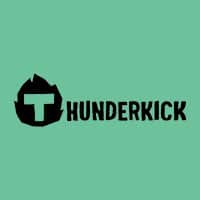 Thunderkick may be a young company in the grand scheme of things but they brought innovation and uniqueness to the online gaming industry the minute they arrived. This is something that not many other companies can claim, so it instantly made them stand out. Despite only having released a very small collection of slots, there have not been many complaints from players. Just going to show the level of quality they are producing. Added to that, they are committed to providing the best player experience they can, putting their hearts and souls into the creation of each and every one.

Thunderkick was established in 2012 and is based out of both Sweden and Malta. Despite starting off as a small team, the members of the company all have years of industry experience behind them which puts them in a good position to move forward. In fact, many of them worked for the prestigious NetEnt, so they definitely know their way about the industry! Even though they’ve only been around for a few years, Thunderkick’s first game releases were instant hits. The provider has its games on offer at hundreds of online sites and the company is continually looking for new opportunities to expand their reach.

In 2014, the company had already developed eight slots and soon signed a deal with Unibet which saw their online growth grow exponentially. Then, there were many other deals made with providers after this partnership. Since those days, more and more casinos have signed up to Thunderkick. As of 2016, there were more than seventy sites featuring Thunderkick titles which is incredible given that this occurred in just four years. The only real downside here is that the company does take time to produce their games, often with many months in between releases, but with such loving care given to each one, do we really mind?

At the moment, Thunderkick has focused their attention on slot games only, having produced just 26. This means that these are of the very highest quality, though we can’t help but wonder what their table games might be like. These slots are not for the faint of heart, however, as all of them are high volatility games. This means that when the payouts come, players will get a big reward but along the way to getting there, payouts can feel a little few and far between. This means that players will either need a larger bankroll to make it through, or carefully monitor all of their wagers.

There are a number of top games available that seem to be popular across the board with players. These include Esqueleto Explosivo, Pink Elephants, Bork the Berzerker and Turning Totems, though there are a number of other exciting slots as well. Each of these offers a unique take on the slot game world. Offering exciting extras and as much as 1000x the starting bet in wins. All of the games are either already formatted using HTML5 or are being updated to this format so that they can be played across many different types of devices – allowing players to have full accessibility to the slots, no matter where they are.

Thunderkick clearly states that their main focus is not the amount of games they produce. But rather the quality of each. With this in mind, each of the games comes with stunningly designed graphics as well as strange yet enticing themes – no one would have thought a game about cutting hair could be fun, but it is! The slots also feature exciting animations. The Turning Totem reels, for example, adds just a little something extra to the game. The graphics are also rendered 3D and each game has a matching soundtrack, a far cry from some of the jarring noises offered on other slots.

Further to this, each of their slot games are strictly created in house. This allows the company to follow through on its promise of high quality. And enables them to focus on providing the best possible experience for their players. It should be noted that like many other providers. They don’t create their own platform but actually create games that are compatible with platforms so that numerous operators can use them. All the games load speedily even with the more advanced graphics. Thus avoiding some of the difficulties that are known to surface when it comes to these kinds of games.

As Thunderkick is such a young company, it does not come as a surprise that as yet it has no awards to its name. However, with their ever-growing presence in the industry, it is likely that they will see some successes very soon. In conjunction with this, though, a number of the operators that showcase Thunderkick slots have actually won awards for best casino or mobile casino product. We can’t say that Thunderkick was the main contributor to these wins. But it is safe enough to assume that their slots would have been a strong contributor to helping these casinos get these accolades.

Regardless of this, these wins do show that Thunderkick is keeping good company with the operators it works with. Some of the winning operators include Mr Green, LeoVegas and Unibet. Which all take regular wins at the EGR awards and IGA’s, both of which being among the biggest in the industry. With the stellar quality of its games. We are sure that Thunderkick will soon be recognised for its prowess in the gaming industry. However, the provider has already received player praise with hardly any bad words from those who actually use the games. And as this is Thunderkick’s intended audience, we think that is a pretty good start.

When it comes to player safety and the licensing that comes with it, Thunderkick is second to none. The company is licensed with multiple jurisdictions. Most notably the UK Gambling Commission and the Malta Gaming Authority. Though they also hold licenses in Italy, Gibraltar, the Isle of Man, Denmark, Latvia, Portugal and Spain. These jurisdictions all have strict requirements in place, particularly when it comes to fair gaming. Because of this, the Thunderkick has all its games regularly audited by third party companies to ensure that there is no bias towards either the player or the operator at any time.

Thunderkick also endeavours to ensure that players have a good time when playing. This includes responsible gaming aspects being added to their games. For example, each game has a reality check incorporated into them so that players know what time it is. How long they have been playing, how much they have wagered in that period and what their wins and losses are. In conjunction with the operators. Thunderkick also provides self-exclusion options as well as links to national helplines if players feel that they have a problem with gambling in any form. All of this helps to promote a more positive gaming experience.

Thunderkick offers few games but those available are of exceptionally high quality. Almost all of them display top of the line animations and graphics coupled with original gameplay features. In addition, all of their games have very high return to player rates. And some really big wins available inside the game, often more than 1000x the original bet. The games are also accessible across a number of jurisdictions helping them to reach as wide an audience as possible. The only negatives we can see are that there are no progressive jackpots available. And the graphics can be a little cartoony, something not necessarily to everyone’s taste.