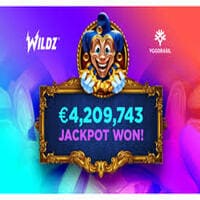 The game provider of this extremely rewarding slot shared the news with its operator partners and fans on its official website, which is something that always happens when a staggering win have been delivered by the progressive jackpot network.

The latest big win was struck on Empire Fortune. A Wildz Casino player decided to try out their luck on this incredibly rewarding slot on their laptop. So, they accessed the casino, loaded the game, and in just a few moments, luck got on their side.

Empire Fortune, actually, has action-packed gameplay, loaded with exciting features. It is a 5-reel, 20-pay line slot that features Free Spins with Multipliers, as well as the Hold Feature. Its star feature is the bonus round, the Jackpot Wheel, where three jackpot prizes can be won. The two are local jackpots, the Gold and Diamond jackpots, and the third one is the progressive jackpot, Empire Jackpot. To hit the jackpot, players need to get to the bonus round and hit the right spot on the 3D Wheel of Fortune to hit one of the three jackpot prizes. The Wildz Casino player, evidently, managed to do so and scooped €4,209,743.

Congratulations by Yggdrasil and Wildz Casino

Fredrik Elmqvist, Yggdrasil’s CEO said that they were all delighted to see another massive drop on the developer’s popular progressive jackpot slot Empire Fortune. Elmqvist said that Yggdrasil’s progressives have been massive hits and immensely successful ever since they were released, and appealed to a huge player base looking to take home wins as big as this lucky player scooped while enjoying an awesome casino experience. He finally congratulated the lucky player, the new multi-millionaire, saying that he couldn’t personally wait for the next jackpot to be hit by another fortunate player.

Tony Kjäldström, Wildz Casino’s representative and COO of its parent company Rootz Ltd commented that progressive jackpot titles were hugely popular and were attracting many players to the casino. Therefore, they were all excited to see one of their own customers receive such a life-changing sum playing one of Yggdrasil’s most popular titles, Empire Fortune. He added that this win was actually the biggest jackpot win the casino has ever cashed out to a player. Finally, Kjäldström extended huge congratulations to the lucky winner, both on his behalf and on behalf of everyone at Wildz Casino.