A Series of New Slots Arriving by Microgaming This April! 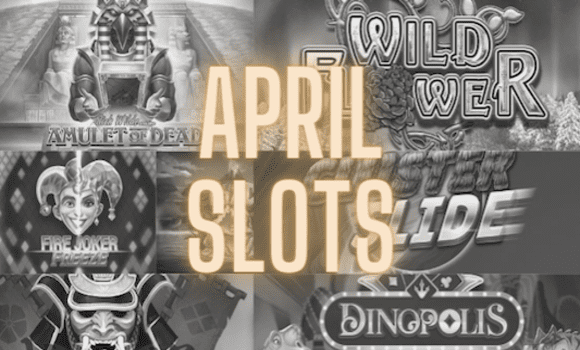 Each month, we are witnesses of how great Microgaming is, and how powerful its games portfolio is. This April, we’ll be seeing a bunch of new titles being released by the developer, some created by its partner developers while others by the small studios that make slots exclusively for it.

We’ve got so much ground to cover, so let’s get started right away!

Microgaming to Release Plenty of New Slots This April

It is clear to you by now that Microgaming makes sure to release a bunch of new titles each month. So, let’s get straight to business and explore all of the new slots you’ll see arriving this April.

Gold Collector is the first April title, launched on the 6th. It is a slot developed by All41Studios that features the HyperHold feature, comes with cartoony graphics and allows you to win up to 5 jackpot prizes. Queen of Alexandria WowPot is the next title released on the 13th of April, created by Neon Valley Studios. With a progressive jackpot that was nearing €15 million at the time of writing, this slot can help you get to the lost riches of the pharaohs in a split second!

Next is the slot that takes you on an adventure to find the riches of Avalon, designed by JustForTheWin and called Book of King Arthur. It is set to be released on the 20th of April, and it is a slot that will help you win a jackpot prize when you trigger the Expanding Wilds and other special features.

On the 22nd arrives 8 Golden Skulls of Holly Roger Megaways, a debut title for Buck Stakes Entertainment, the latest studio to be added to the developer’s network of independent studios in an exclusive deal. Boosted with up to 117,648 ways to win, the Rolling Reels, the Firepot jackpot which can deliver 1,900x the bet, Multiplier Bonus Wheel and Free Spins, this slot is the star release for the month.

The last two titles arriving on Microgaming’s platform this month are SpinPlay Games’ 9 Blazing Diamonds and Snowborn Games’ Egyptian Tombs, to be released on the 27th and 29th of April, respectively.

Anna Van Helsing Monster Huntress, released on the 15th and developed by Rabcat is next, followed by the two titles by 1×2 Gaming, Triple Bar 98 and Triple Bar 96. An exciting release by Big Time Gaming, a branded slot inspired by the TV show Survivor is to be released on the 19th, followed by 1×2 Gaming’s Phoenix Inferno on the 21st. The last two titles by Microgaming’s partner developers to be released this month are Inspired’s Fishing Cashpots and BTG’s Wild Flower, to go live on the 26th and 28th of April, respectively. As you can see, these April releases are packed with thrill, jackpots and special features, allowing Microgaming’s content on the platform to continue being fresh, diverse and relevant. So stay tuned and play the new titles one by one right after they are released!