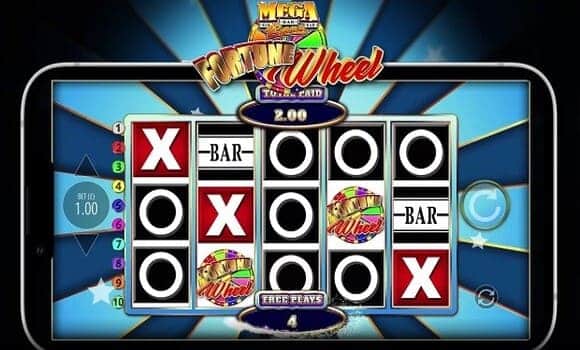 Blueprint Gaming is one of the best iGaming studios to come out of the UK. The leading developer never fails to dish out exciting new games, so players aren’t too surprised when they run into an announcement about an upcoming release. Of course, this isn’t always the case. Blueprint has managed to surprise core fans by launching a new and improved version of an all-time classic in its lineup – the Mega Bars Fortune Wheel Jackpot King slot! The beloved title is one of the studio’s biggest successes, and this sequel has many casino fans up in arms about giving it a try. Even better than the Deal or No Deal Slot.

One of the things that made the original game such a smash hit was the design. Debuting in the then-relatively new online casino space, its classic look offered players comfort. The old-school design might not be too popular now that we have themed slots of all kinds, but Mega Bars Fortune Wheel Jackpot King manages to bring it back in style!

The studio has kept the game’s classic appearance up-to-date with subtle changes that add a modern spin. It might not be what most players had expected, but it’s bound to stir up some nostalgia in Die hard fans.

The design elements in the game are ones most of you will recognize. They include bar symbols, X and O symbols, Free Plays symbols, and Fortune Wheel symbols. It’s no secret that these elements try to mimic the ones we all remember from the golden age of mechanical slots. Add on top the new game features, and you’ve got glitz and glamour akin to what you’d see in luxurious land-based venues.

The new and improved version of Mega Bars Fortune Wheel Jackpot King has many fun additions that improve gameplay. An excellent feature introduced in the sequel is the Fortune Wheel. Getting over three matching symbols means you can spin the wheel and win some big prizes. Depending on which field it lands on, your cash prize can be multiplied significantly!

Another feature fans have been dying to see in a new iteration of the slot is Blueprint’s famous progressive jackpot system – Jackpot King! The win potential players now have, thanks to this addition, is miles improved. If players happen to land five of these symbols on the screen, they can activate the feature and choose one of the three jackpots that pop up.

Given the popularity of its predecessor, it’s not hard to assume that the new version of the Mega Bars Fortune Wheel Jackpot King slot has already seen moderate success. While it’s still too early to tell how it will perform down the line, the game is doing pretty well for itself in the current online casino climate.

If we had to make a guess, we’d say that Mega Bars Fortune Wheel Jackpot King is destined for great things. The improvements made to the title appeal to a wider audience, while the preserved style of the old game gives off a charm that’s hard to find these days