Cook with Gordon Ramsay Himself in NetEnt’s Newest Slot on the Menu, Hell’s Kitchen Slot 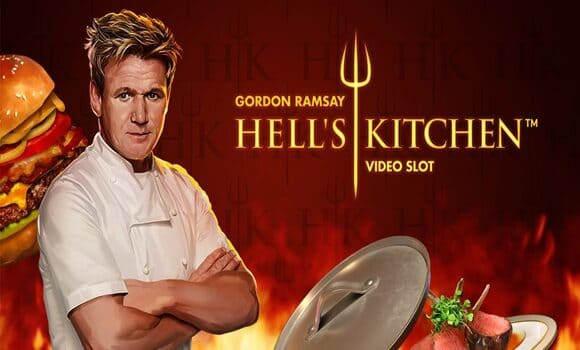 There’s hardly any person on Earth that has not heard of or watched Gordon Ramsay on TV shows and cooking programs. The international TV star, the world-class chef makes his appearance in NetEnt’s latest branded slot, Hell’s Kitchen.

And if you know, Hell’s Kitchen is also the name of Gordon’s most popular show. In this branded slot, you’ll be cooking side by side with Gordon, and get a taste of the thrill.

NetEnt has once again delivered an exciting branded slot, one that would appeal to any foodie and any slots player looking for huge wins. The premium developer, now part of Evolution Group, has launched Hell’s Kitchen Slot, a branded collaboration where the worldwide-known chef presents its signature dishes and showers you with its catchphrases.

For those of you who don’t know him, Gordon has operated many successful restaurants internationally, accumulating 16 Michelin stars. He became a household name in the UK as he transcended the culinary world, and became globally-known through several TV shows, including the most popular one, Hell’s Kitchen. 20 seasons in, the hit show continues attracting audiences all across the world. This show precisely is the inspiration behind the new, same-named 5-reel, 3-row video slot.

Hell’s Kitchen, the video slot, perfectly depicts the emotionally-charged atmosphere of the show, with flying knives, plates and pots during one of the many features, Ramsay’s Wilds. This feature puts up to 7 Wilds on the reels at random during the base game.

Three Scatters, the chef’s glaring stares, trigger the Team Challenge Free Spins, where, naturally, all hell breaks loose. This is when you get two playing areas. A cooking competition between the blue and the red team will start. You would need to pick a side, and if your team wins, you get to Gordon’s Bonus Game, where you can win random prizes of up to 5x the stake and Multipliers.

Originally a British TV series created by Ramsay, Hell’s Kitchen has been adapted in numerous global editions and franchises, including the US, where the 19th series of the show is being broadcast on FOX.

Statements by the Developer and the Chef’s Agent

Evolution’s Chief Product Officer Todd Haushalter said that this was a genuinely fun game rich with bonus features that couldn’t be found in any other slot. Haushalter said they brought new playing mechanics to the industry with the slot, as the team had done an amazing job with the game and brilliantly captured the essence of Hell’s Kitchen and Gordon Ramsay. Finally, he said that they were certain players who would absolutely love it.

Jens Drinkwater, the Licensing Manager at the chef’s licensing agency Global Merchandising Services said that NetEnt’s reputation as a leader in creating branded entertainment products was preceding it, and was a determining factor in working with it in the creation of Gordon Ramsay Hell’s Kitchen video slot. He said that they were all proud of the game and sure that fans of the show would love it.