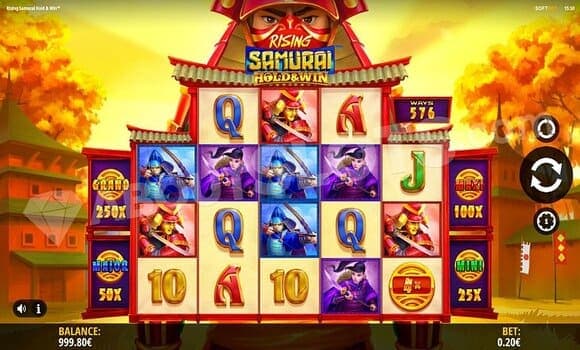 We’ve been greeted by countless new slot titles from various game developers and content publishers this last year. While we can’t deny that this is a good thing, it does make it hard for players to weed out the quality titles from the sea of uninspired games. Thankfully, this is a terrific problem to have. Sure, you might run into a few games that aren’t your type, but you’ll also likely find your new favorite pastime! To save you a few steps in this journey, we’ll introduce you to one of the top-tier up-and-coming titles by iGaming supplier iSoftBet – Rising Samurai: Hold & Win. Quite soon after the latest release, the Magic Orb slot.

One of the most important things players watch for when exploring slots is the design. While it might seem somewhat superficial, the design elements of a game can make or break it! The game’s artwork sets the tone for how things will progress, and it’s what keeps players engaged and invested in what’s happening on the screen. The same can be said about the sound design and backstory. Combined, these create the ultimate trifecta of what makes a good slot game.

Thankfully, Rising Samurai: Hold & Win fits the mold perfectly in all of these aspects. As you can imagine, the game is inspired by the legendary stories of Samurai from Japanese history. Because of this, the background is adorned by traditional Japanese architecture during the sunset. The game’s symbols are on the more classic side. While some take the form of different samurai designs, most are typical letters and numbers. A few gold coins also appear on the reels, along with a legendary Katana.

The basics of Rising Samurai: Hold & Win are easy to grasp. The game is a 5-reel slot with 576 ways to win in the base game alone. If you’re lucky enough to unlock the Free Spins feature, you can boost that number up to 3087, making rewards a much more common occurrence. A noteworthy feature here is the Samurai symbols. These are the top-paying symbols in the game, as landing five of the red samurai can up your initial bet by 12.5x. Another thing to take note of is the Wild Symbol. It appears as a shuriken star and serves as a replacement for any other symbol in the game.

To trigger the titular feature Hold & Win Respins, players will need to stack at least five Samurai coins. While it’s active, these symbols can reach up to 10x the bet. Additionally, you can collect Mini, Major, Maxi, and Grand coins that are worth 25x, 50x, 100x, and 250x, respectively. Some other special features players can run into during gameplay are the Free Spins and Katana Modifier active during the Hold & Win round. These usually boost the win multiplier or treat players to a guaranteed win!

Rising Samurai: Hold & Win is another excellent addition to iSoftBet’s growing collection of fun slot titles. Thanks to its beautiful design, creative gameplay, and high-payout features, this game can serve as a great start to any new player’s online casino venture.