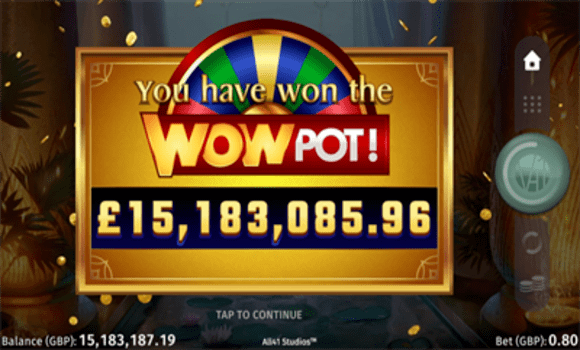 The news was released a few days ago, stating that the huge win landed on Wednesday, the 14th of April, 2021, while the 32Red player was spinning the reels of Book of Atem: WowPot!

The lucky player is now one of the 93 millionaires made thanks to Microgaming’s progressive jackpot networks, across all jackpots and games, delivering more than €1.3 billion to this date. The epic win follows the one-hit last month on Sisters of Oz: WowPot when a player won €1,123,513.15. The massive £15 million prizes were already paid out to the 32Red player in a lump sum.

The rewarding slot Book of Atem: WowPot is pretty new, as well, delivered in September 2020. The Egyptian-themed slot was developed by All41Studios and is the second title to feature the amazing jackpot. The four-tiered jackpot, which starts seeding at €2 million, has so far delivered €23 million since its launch, the last major win delivered last month when a player grabbed a €998,876.35 prize.

Microgaming’s progressive jackpot networks continue reaching new heights, with the latest additions including the two in the epic Mega Moolah series, the Atlantean Treasures: Mega Moolah and the Absolootly Mad: Mega Moolah, developed by Neon Valley Studios and Triple Edge Studios, respectively. But with this massive win, the WowPot network definitely becomes a hit. The WowPot is now restarted to its €2 million seeding value, the Mega Moolah is reaching €18 million, so do not miss them out!

What 32Red and Microgaming Have to Say About the Win?

Neil Banbury, speaking on behalf of Kindred Group and 32Red, said that they were thrilled for the massive win, congratulating both the player on the prize and Microgaming for delivering such an incredible progressive jackpot games offering. WowPot arrived in a series of exciting games, and was quite the hit, next to the Mega Moolah titles, said Banbury.

John Coleman, Microgaming’s CEO said that the win was spectacular, the third-largest in the history of Microgaming’s progressive jackpot networks, and the first iconic on the WowPot. Congratulating Kindred Group, 32Red and of course, the lucky winner, and thanking Alchemy Gaming for being crucial in the creation of the jackpot network and All41 Studios for delivering Book of Atem: WowPot, Coleman finished his statement.