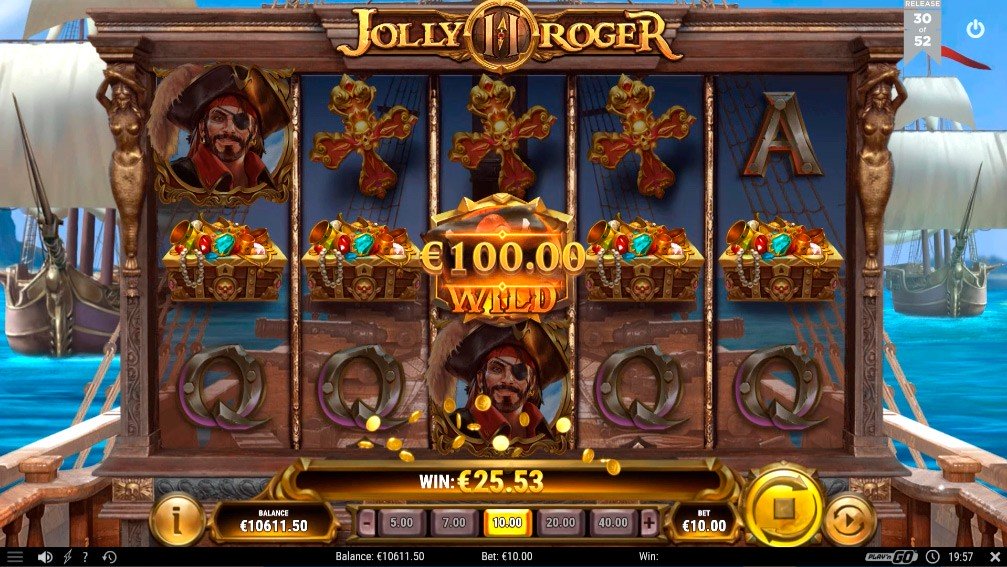 A few days ago, Play’n GO game provider surprised all of Jolly Roger fans with a sequel that also features the swashbuckling pirate theme as the original, Jolly Roger 2 slot.

The original was released back in 2012, so the developer completely revamped the graphics in the sequel, as well as the design, and added a few new features for better player experience. If you’re ready to sail towards the hidden treasures, join Jolly Roger 2!

Jolly Roger 2 slot is a 5×3 video slot with 20 pay lines and 96.20% RTP. Just like the original, it is a pirate-themed slot featuring Red Roger and his pirate crew. However, Play’n GO has boosted the sequel with some very rewarding features that can take you to payouts of up to 5,000x the stake.

The Sea Compass is the first special feature you’ll see. It appears both in the base and bonus games. It can be activated on any spin, adding a Random Multiplier with a value of 10x, 8x, 5x, 3x, or 2x.

Landing the Scatter on the three reels that it can appear, reel 1, 3 and 5, you activate the Bonus Quest mini-game. You choose a quest you want to play through, by matching three out of several rolled-up scrolls. Bottle of Rum is the one where you can unlock Stacked Wilds.

Freebooter Spins is where you’ll fight the armadas. With three lives, you’ll be the one responsible for the reel modifier you’ll get during the spins. If you get to pillage a Merchant Ship, the Pirate vs. Armada symbols on the reels will start fighting. The side that gets the most symbols on the reels will win. You lose a life whenever the Armadas win. Should the Pirate Ship win, you get fully Stacked Wilds on a random reel, while should the British Armada win, all high-paying symbols will be upgraded. Should the Dutch Armada win, all instances of one or two random symbols are turned into Wilds. And should the Portuguese Armada win, three reels spin in sync to display identical symbols.

Play’n GO Shares Its Excitement for the Release

As Play’n GO’s CPO Martin Zettergren pointed out, Jolly Roger 2 slot was the latest example of how the developer delivered slots with a strong focus on narrative. The sequel, according to Zettergren was an epic tale for players to enjoy.

Not only would players have the fun of playing and experiencing all the different rewarding features, but they would all tie together to create an entertaining narrative. Lastly, Zettergren added that everyone at Play’n GO believed that this sort of attention to the story was the next stage of slots developing as an entertainment industry, pointing out that this was evident in titles such as Jolly Roger 2 slot.