The 5 Clans: The Final Battle by Yggdrasil Is Finally Here 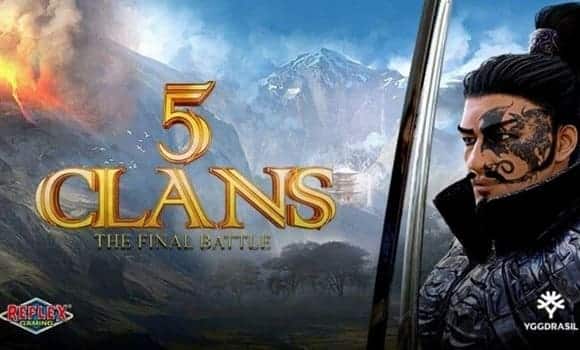 You are already aware of the massive influence that Yggdrasil has in the online casino gaming world. They, as online casino game developers, are quite popular as they have managed to build their reputation with the huge selection of online slot games that they develop. Taking all of this into consideration, the exciting launch of their newest slot game addition will allow you to experience the most exciting elements that Yggdrasil is known for. Take a look into this thrilling 5 Clans The Final Battle slot title and explore the adventurous partnership between Yggdrasil and Reflex Gaming. Continue reading this article and you will get a chance to explore every single detail regarding the hottest slot game launch. So, let’s get right into it.

Starting with the overall theme of the game, players will get a chance to meet the five clans of Dragon, Fire, Ice, Lion, and Wolf. There is an ongoing battle for the overall control of the central lands. Judging by the initial set-up of the theme, you are in for quite the adventure, so buckle up and prepare for the most important battle so far.

The 5 Clans: The Final Battle slot game includes features of the five tribes that we have listed above and their powerful leaders. The overall game is represented through some of the cutting-edge technologies that allow elements like visuals and sounds to shine through.

Besides the captivating theme and the overall background of the game, the 5 Clans: The Final Battle™ is packed with amazing slot game features. Here, if you land the clan shield emblems you will get a chance to trigger the most impressive six features of the game.

These features include The Gold Shield, which is the Bonus Symbol that has the power to reward nine free spins when the symbol lands on the fifth reel. The Red Shield has the power to change the reel into Super Wild, as well as award the player a Free Spin. If you have the chance to land Super Wilds, you will get even more free spins.

Furthermore, The Blue Shield is the game’s accumulator, meaning it can offer x50 the player’s stake. The Green Shield has the power to change other symbols into a Wild and it will award you a Free Respin with a Wild. And finally, The Purple Shield will trigger a Free Respin if it lands on the first reel.

The Head of Product and Programs at Yggdrasil, Stuart McCarthy, said that this is a rather exciting game with an abundance of thrilling features that allow players to experience the adventure and prepare for the most important battle.

The CPO at Reflex Gaming, Mat Ingram, said that they are quite thrilled about this slot game release ad they hope that they will continue developing hit slot games, as well as establish partnerships with major developers like Yggdrasil.